Why is the Tottori Sand Dunes very popular?

The Tottori Sand Dunes is designated as a national natural monument. It is a popular tourist destination visited by about 2 million people annually.

Why does the Tottori Sand Dunes attract so many people?

The most popular location in the Tottori Sand Dunes is the hill of the sand called the “Umanose” (Horseback).

As you walk down the dune from inland to the sea, you will encounter the sandhill with a slope of 32 degrees. 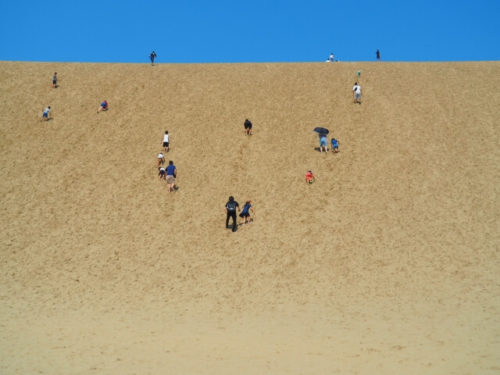 This hill is called the “Umanose.” It is as high as 45 m from the sea level.

This sandhill is called the “Camel Rise.”

In Japan, only the Tottori Sand Dunes has two sandhills with a different height (the Horse Back and the Camel Rise) adjacent to the sea.

Being able to feel such large undulations and differences in height is the most attractive feature of the Tottori Sand Dunes.  It can not be seen in other dunes.

Large amounts of sand from a river flowing near the dune were blown up by strong winds from the Sea of Japan.   Then created these two high sandhills over a long period.

Therefore, Little by little, the dune is moving inland from the seaside.

Why are these two high sand hills adjacent to each other?

You can find out the reason by studying the geology of the “Camel Rise,” the hill farther away from the sea.

You can see red soil near the Camel Rise. And this red soil is the deposited volcanic ash.

The Camel Rise was made by volcanic ash covers the surface of sandhill and new sand blowing up by wind is deposited on the volcanic ash.

The Camel Rise is solidified by this volcanic ash so that the entire dune will not move further inland by the wind from the sea.

On the other hand, the Umanose is made only sand (no volcanic ash), so it has been moving toward inland by the wind.

This has created the current shape of the Tottori Sand Dunes, where two sandhills are closely adjacent.

The wonderful landscape was created in this way.

The volcanic ash of the Camel Rise was found to be a thick layer of volcanic ash that flew from “Oyama” during the eruption.  Oyama is the highest mountain in the Chugoku region and erupted about 60,000 years ago.

The volcanic ash erupted from Oyama caused the entire dune to be solidified. Oyama is 65 km southwest of the Tottori Sand Dunes. As a result, the high dune (the Camel Rise) that does not move by the wind was made.

”Springwater” Another charm of the Tottori Sand Dune that attracts people

In addition to the two tall sandhills, the Tottori Sand Dunes has a great charm to attract people.

It is “spring water.”  In the Tottori Sand Dunes, water springs from under the dunes and the spring water flows out all year round. 600 tons of water are flowing out per day.

Why there is so much spring water despite it is the dunes?  It is because the layer of volcanic ash is impervious to water and the water remains in the sand piled up on the volcanic ash.

The rain that falls on the “Camel Rise” hits a layer of volcanic ash, flows sideways, and springs out as an oasis at the bottom of the dune. 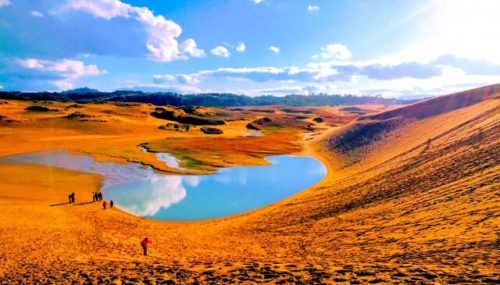 Some households near the dune use this spring water for daily life.

The Tottori Sand Dunes has been “the land rich in water” since the Edo period.  This is the reason why it was developed as farmland and residential area.

The Tottori Sand Dunes is a tourist attraction.  However, we can visit only a small area of the original dunes as a tourist spot.

Why the part of Tottori Sand Dunes has remained as dunes and was not developed as farmland or residential area?

This is because the Army owned the land during those days.  And the desert and the rugged terrain were the best training grounds for the Army.

Later, in 1955, the Tottori Sand Dunes was designated as a national park in Japan.