Why eel culture fishery has developed in Lake Hamana?

For a long time, when people think of eels in Japan, Lake Hamana comes to the minds of many of us.  When we think about eel, we think about the famous sweets of eel pie as well.

According to the Ministry of Agriculture, Forestry, and Fisheries, the production of farmed eels in Shizuoka Prefecture was the fourth largest in Japan in 2018.

Even Hiroshige Utagawa, the renowned Ukiyo-e painter of the Edo period, depicted eel in his work. The title of the work is “Kabayaki (a broiled eel with thick sweet sauce) of Arai, Lake Hamana: Local Specialty” in “A Collection of Pictures of Fifty-three Stages of the Tokaido.”

This fact shows that Lake Hamana was already a famous place for eels since the Edo period. 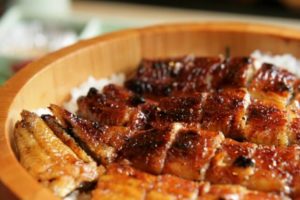 When the first large-scale eel culture fishery in Japan began at Lake Hamana in the Meiji era, eels of Lake Hamana became instantly famous in Japan. In 1965, farmed eel production in Shizuoka Prefecture grew to a level accounting for 70% of Japan.

The water quality of Lake Hamana is “Kisuiko” or brackish water, where seawater and freshwater are mixed. Brackish water is one of the advantageous points for eel culture fishery in Lake Hamana.

The entire area of Lake Hamana was a sea until about 6000 years ago. At that time, seawater had penetrated the present land and valleys. After that, sand accumulated at the entrance of the bay, and a standing sand bar formed there. 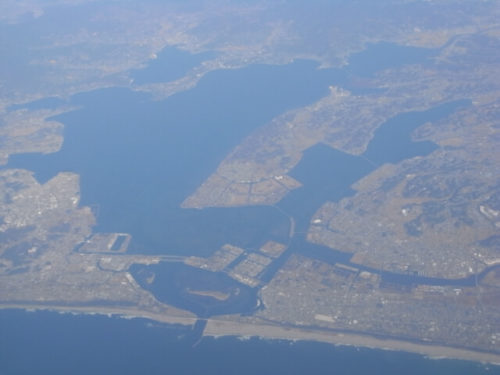 To farm eels, you need “white eels” which are fry of eels.

A native eel produces eggs off the Mariana Islands about 3000 km south of Japan. The hatched eels grow along the currents of the Black Tide in the Pacific Ocean and become glass eels and come to the coast of Japan.

Glass eels live in brackish waters for a while, and when they grow to a certain extent, they mostly spend their lives in freshwater upstream of the river.  And when they further develop and become eels, they return to the sea again.

Since brackish water area is where the water of the sea and the river get mixed, it is an essential place for eels to get their body used to water between moving from the sea to the river and go back from the river to the sea.

Lake Hamana, which consists of brackish water, is an adequate environment for collecting “glass eels” and farming them.

Clean freshwater springs up as groundwater.

“A lot of clean water” is indispensable to grow many eels by aquaculture. Lake Hamana consists of brackish water, so it is not suitable for aquaculture.

However, this area has a lot of well water, which is clean, freshwater and can be used for aquaculture. 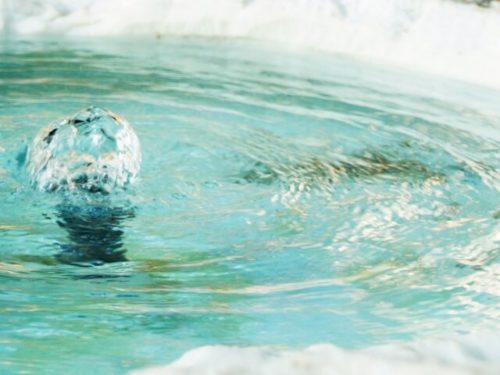 The fact that freshwater springs very close to the salty lake is the secret in this area.

When Lake Hamana was still covered under the sea, “layer of gravel” piled on “layer of mud” in the stratum in this area.

“Sand” piled on “mud,” and rainwater passes through the sand.  But mud has the characteristic of being hard to penetrate, so freshwater springs from the boundary between the two strata.

In this way, mud and sand make up the strata around Lake Hamana. The sand was brought by the “Tenryu River” located 20 km east of Lake Hamana.

Tenryu River is a large river with a total length of 213 km. Over an extended period, a large amount of gravel came out from the river. And the sand piled up as a layer of sand on the mud around Lake Hamana.

Thus “clean water” began to spring from between the strata.

It is easy to create a pond to farm eels.

Aquaculture requires a pond to store freshwater, and Lake Hamana also was adequate to make such pond.

On the shores of Lake Hamana, you can still see the remnants of “aquaculture pond” created for aquaculture more than 100 years ago. It is the “Ishigaki” or stone wall constructed on the bank to form the aquaculture pond.

The stone wall is made of chert rock. Chert rock is a rock made of radiolarian fossils from the sea and has a reddish-brown rock surface. 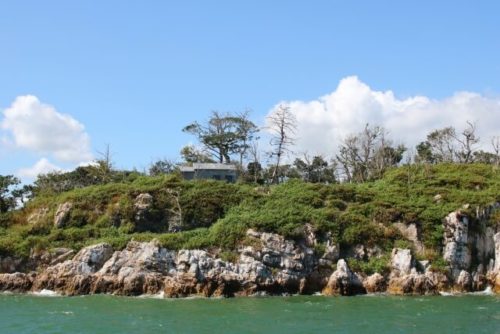 Chert formed 200 million years ago can be seen on the rock surface.

Aquaculture ponds made by reclaiming the lake in this way are called “river pond.”  And a pond equivalent of about 75 Tokyo Domes was built in Lake Hamana during the Taisho era.

However, burying the lake has adverse effects on oysters, seaweed, and other living organisms. So it reached a limit to reclaim Lake Hamana to create aquaculture ponds.

Why could the pond be further expanded?

About 8 km east of Lake Hamana, you can find the secrets of reason why ponds could be further expanded. As you walk along with the current “Tokaido Road,” you can see that both sides of the road are downslope and that Tokaido is on a hill.

The terrain where such height continues is called “Hintei” or beach ridge. Beach ridge is a height of sand created by the waves of the sea, and on the east side of Lake Hamana, beach ridges are formed in rows along the coastline.

The beach ridge creates “lowland” necessary to make a pond. The poorly drained “lowland” between the beach ridges is an inconvenient place to live in, but they are the best place to turn into a pond.

There are still many eel ponds in the lowland.

The bottom of this lowland is made of sand and stone, making it a very suitable terrain for eels to rest on when used as an aquaculture pond.

The largest existing pond, which was created at the beginning of the Showa era, is 5,000 square meters in size. When the water would be drained, 50,000 eels would appear from the pond.

The reclaimed lake is called “Horiike” or moat pond rather than “Kawaike” or river pond. “Horiike” was created until the 1970s and supported the production of eel farming.

In the eastern area of Lake Hamana, “beach ridge,” “moat pond,” and “river pond” extend in parallel along the coastline.

The eels grown in the ponds are sorted by size at the sorting yard of the fishing cooperative by human eyes.

And as a final finish before shipping, it is washed with clean spring water and groundwater to remove mud and dirt. 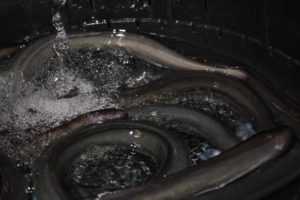 Immediately behind the fishing cooperative and the sorting yard is the train track.

The southern part of Lake Hamana was the best place for distribution.  Eels can be shipped to Tokyo and Osaka on the same day from the lake.  It is because the Tokaido Main Line, the main artery of Japanese traffic, passed through.

Besides, the eel farming ponds and fishery cooperatives around Lake Hamana can be seen from the train, so it helped promote eel farming.

“Imakiriguchi” connects the Pacific Ocean and Lake Hamana. It is where eel farming started.

The frontage of “Imakiriguchi” is only 200 m. The Hamana Bridge is hanging on the location.

This cut-off point between the Pacific Ocean and Lake Hamana allowed seawater to mix with fresh water, making Lake Hamana a brackish lake. 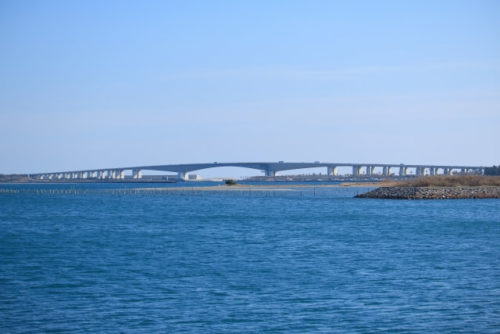 The “Imakiriguchi” connecting the Pacific Ocean and Lake Hamana was created when the sandbar was destroyed by the “Meiyo earthquake” during the Muromachi period.

The existence of “Imakiriguci” helps to connect Lake Hamana to the Black Tide, the Pacific Ocean, and the Mariana. Thanks to “Imakiriguchi,” fry fish of glass eels can reach Lake Hamana over 3000 km distance.

スポンサーリンク
Fukui: The roots of Fukui City is in Ichijo-dani