The roots of Fukui City is in Ichijo-Dani.

Fukui City is a castle town of the Echizen Matsudaira family during the Edo period with an area of about 12 square km. The city is currently the political and economic center of Fukui Prefecture with a population of 260,000.

Going back to the “Sengoku Period” or the Warring States period, Asakura Yoshikage (1533-1573) was the “Sengoku daimyo” or a warlord who ruled the current Fukui, “Echizen.”

The castle town created by Asakura is called “Ichijo-Dani.”  And its site is about 10km inland from the current city center of Fukui. It is about 15 minutes by local train.

If we have a chance to visit Fukui City, Ichijo-Dani is a place we want to take time to go. You can still enjoy the traces of the castle town built by Asakura during the Warring States period. 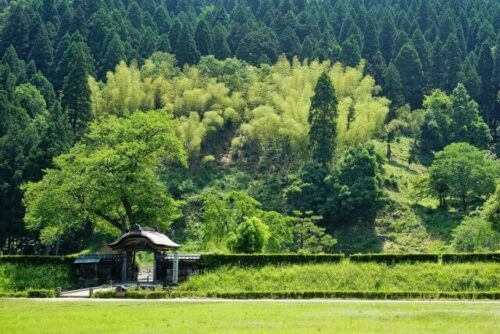 This castle town built by Asakura is said to be a “phantom city.”

This is because the castle town was burned down by Nobunaga Oda, who was the enemy of Asakura at that time. That’s why Ichijo-Dani was extincted only in 100 years.

However, about 50 years ago, the extinct town was excavated from under the soil. Since there were many discoveries from the Ichijo-Dani valley ruins, the place was designated as a national special historic site.

The Asuwagawa River flowing through Fukui City is divided further inland, and its tributary flows into Ichijo-Dani valley.

Ichijo-Dani was a well-planned city.

There is a huge “Ishigumi” or rockwork at the entrance of the Ichijo-Dani.

The current address in this area is called “Kidonouchi,” meaning “castle door” because this place was the entrance to the castle town created by Asakura.

And the huge stones used in the vast castle town of Ichijo Dani protected the town from its enemies. 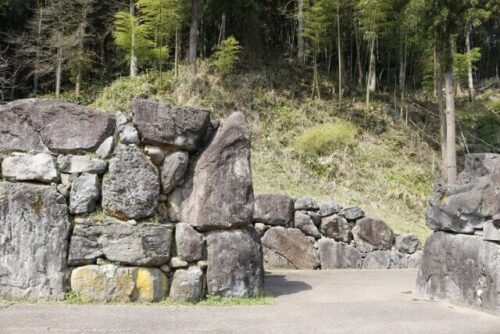 As you enter the ruins of the castle town, you can see that low height stones are piled up to divide each residential area. And within each divided residence, there is a trace of square wells.

This fact indicates each dwelling had a well in those days. 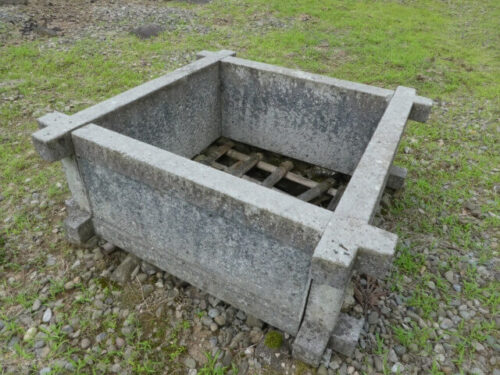 Not only wells but also traces of toilets can be seen in each residence. 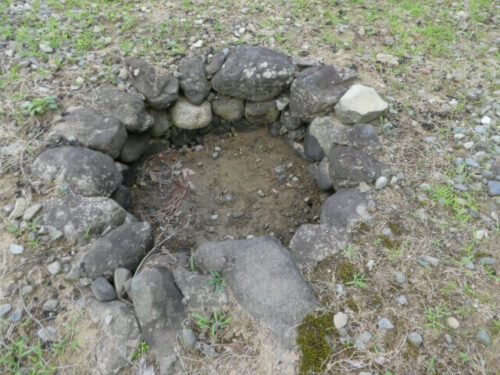 Accordingly, in the 1500s, Ichijo-Dani was a landmark city where each residence had a well and a toilet.

The discovery of some of the Chinese medical books led to identifying the homes of doctors with state-of-the-art medical technology at the time.

In this way, various relics that show the life of those days have been excavated from Ichijo-Dani. There are more than 2,000 relics designated as national important cultural properties.

Why was the archeological site of Ichijyo-Dani was excavated in such a good condition after buried in the soil for over 400 years?

Immediately after the town was destroyed by being burned down by Nobunaga Oda in 1573, the area was buried under the soil and became a paddy field.

For this reason, the ruins of Ichijyo Valley have been in a vacuum pack state for 400 years long. The ruins did not rot because the ruins were always surrounded by water.

In the area of the current Ichijo-Dani, there is also an area that recreates the townscape at the time. 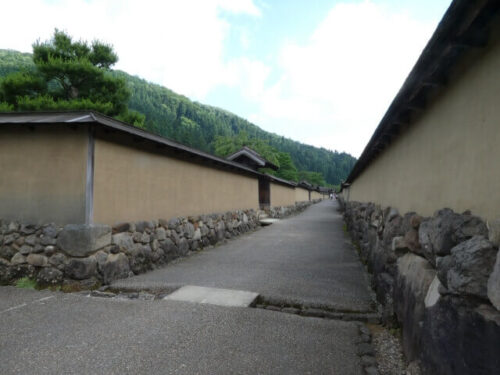 The area with clay walls on both sides of the road is the samurai residence area where Asakura’s vassal lived.

The castle town is very realistically reproduced using the relics and archeological sites found by the excavation.

In a standard castle town, the area of the “Bukeyashiki” where old samurai warriors live and the area of “Machiya” where merchants live are separated.

But in the castle town Ichijo-Dani, these two areas are intermingled. 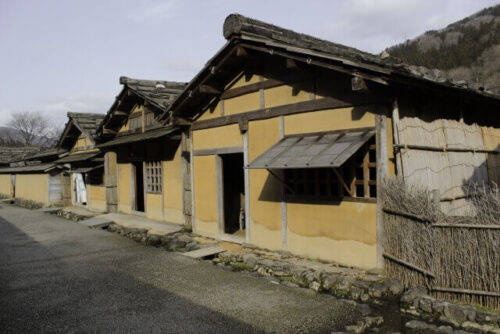 It is considered that the area originally a samurai residence was turned into a merchant house as the economy of Ichijo-Dani developed.

Why was the economy of Ichijo-Dani developed?

In the center of the town, there is a place where the lord Yoshikage Asakura lived. 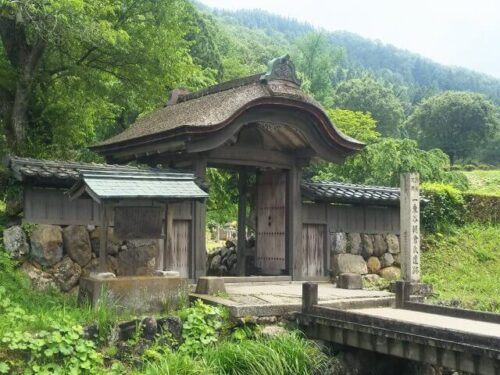 Why Ichijyo-Dani was able to become economically rich?  It can be seen from the pieces of glass found in the place.

The fragment of the glass was that of the Venetian glass. In other words, it shows that there were trades between Europe and Ichijo-Dani.

A model of a large ship was also discovered from Ichijo-Dani, and it shows that Ichijo-Dani dominated the water transportation of the Sea of Japan at that time.

Despite being located in the interior of the inland mountain valley, since Ichijo-Dani was connected to the Sea of Japan through the Ashuwa River and Kuzuryu River, Ichijo-Dani was able to connect with the world and develop economically.

Ichijo-Dani flourished in those days was burned and destroyed by Oda Nobunaga. And the castle town has been moved to a vast plain that is now the center of Fukui City.

Fukui Castle has been the center of Fukui since the Edo period.

This slightly greenish-white stone is called “Syakudani stone.”  It is a type of tuff made of ancient volcanic ash and is one of the finest stones that represent Fukui.

This slightly greenish-white stone is called “Syakudani stone.”  It is a type of tuff made of ancient volcanic ash and one of the finest stones that represent Fukui.

The Syakudani stone is used everywhere in Fukui Castle because it is soft and easy to process. And this Syakudani stone was also used for the frame of the “well” in the residence of Ichijo-Dani.

It is said that the era of the Ichijo-Dani was the beginning to use the Syakudani stone in various fields such as tiles.

In Ichijo-Dani, technology for processing stones was advanced, not only well frames but also tiles, building materials, and daily necessities.

The Syakudani stone was a legacy inherited from the era of Ichijo-Dani to the new era of Fukui.

Why were they able to use a large amount of the high-grade Syakudani stone?

To the west of Fukui Castle, there is a mountain called Asuwayama, which is almost entirely made of Shyakudaji Stone.

There is a fancy restaurant called Tangando located 2 km west of Fukui Castle.  And its garden is entirely made of Syakudani stone.

And in the Edo era, beautiful and easy-to-process Syakudani stones were transported and sold throughout Japan, bringing huge benefits to Fukui.

The cut-out stones were transported all over Japan through the Aswa River.

Economic development was achieved by using water transport from the river to the sea during the Ichijo-Dani era.  It means that the wisdom from the era succeeded in the castle town of Fukui during the Edo period.

Currently, there is a place the west of Fukui Castle.in the city with the name “Ichijo Town.”

This area was the place where craftsmen and merchants from Ichijo-Dani fled the war and relocated. And the economy has been supported by these people, and so Fukui has been developed.

David Fincher’s overseas TV drama, Mind Hunter Season 2, was released on Netflix on Friday. I watched all 9 episodes over the weekend only within 3 days! If you haven’t seen it yet, please enjoy it from season 1.
2020.03.28

Kobe Port: Why Kobe has so flourished and what does “High Color“ mean?

Kobe Port has flourished as a good port for 1300 years. And Kobe Port is a good port for three reasons. 1. Deepwater 2. Mount Rokko prevents wind 3. The flow of the tide is gentle, protected by Wada Cape
2021.10.16

If you are watching the 24 series for the first time, I am sure everyone enjoys the drama from the viewpoint of CTU Jack, and of course, I do too, but this time I rather watched it from the aspect of the villain side.
2020.03.27

IMDb [Recommended APP If You Watch Overseas Dramas and Movies!]

We can download the IMDb app by free. In addition to information on overseas TV dramas and movies that are currently in fashion, it is packed with information on actors/actresses in a huge number of works and rating scores aired in the past
2020.03.28

Tottori Sand Dunes: Why is the Dunes by far very popular?

The Tottori Sand Dunes is designated as a national natural monument. It is a popular tourist destination visited by about 2 million people annually. It faces the Sea of Japan and is 2.0 km east-west and 1.5 km north-south.
2021.10.16
Kagoshima: Why Satsuma Clan became the leading role in the Meiji Restoration?
Lake Hamana(-ko): Why has eel culture fishery developed in Lake Hamana?