What is the “hurdles” of the Kanmon Strait?

The meaning of “Kanmon” in Japanese is “difficult” or “hurdles” in English. And there are many difficulties or hurdles in the Kanmon Strait. The sea width is narrow, the terrain is complex and difficult to pass through by ship.

The Kanmon Strait is only 0.7 km wide although it is 27 km long.

Although its scale is smaller than that of other straits of the world, many more vessels pass the strait with currently about 500 ships a day.

The location of the Kanmon Strait is excellent.

About 500 ships pass the strait in a day because of the Kanmon Strait’s excellent location. 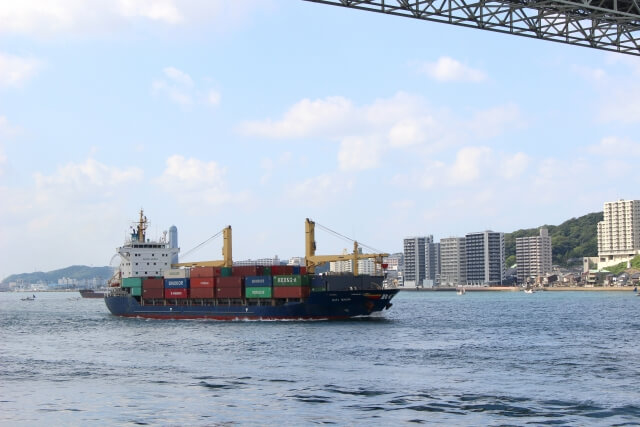 When sailing from South Korea or China to Osaka or Tokyo, the Seto Inland Sea has very gentle waves so that ships can sail safely by going through the sea.  It is located between the Kanmon Strait and Osaka,

The Kanmon Strait is an international route.   And it was also the route of the Japanese official diplomatic delegations sent to China from the 7th to 9th centuries.  It is called Japanese missions to Sui Dynasty China and the Tang Dynasty China.

The first hurdle is its “narrowness.”  The lower part of the Kanmon Bridge that connects Shimonoseki and Moji is the narrowest section of the Kanmon Strait and is only about 700m wide. Every day, 500 ships, including large ships, pass through this narrow strait.

The second hurdle is the “speed of flow.”  Tide from both seas flows toward the narrowest place of the strait so that its speed becomes about 20km/h.

Therefore, there is a risk that ships going through the strait could collide with each other.

The third hurdle is “shallow water depth.”  The Kanmon Strait has long been known as a dangerous strait that has several shallow bottoms.

The Origin of the Kanmon Strait

We can overlook the Kanmon Strait and the surrounding mountains from the “Hinoyama Park” in Shimonoseki in Yamaguchi prefecture.

The small mountains on both sides, which are currently divided between Honshu (the main island of Japan) and the Kyushu region, used to be one connected mountain in the past.

They were proved to be one mountain before from the fact that both mountains consist of the same rocks made of mudstone called Hornfels, which is hardened by the heat of magma. 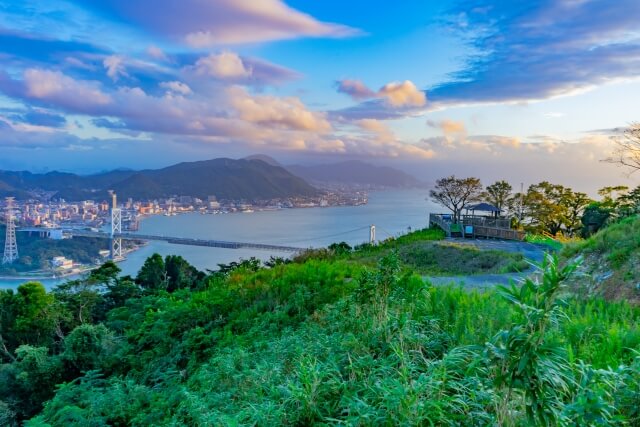 Magma in the middle was shaved before the hornfels and became the strait, which is made of granite.

We can still see that the sand on the shore of the strait is made of the weathered granite.

Seawater entered into the granite and formed the narrow strait, whereas the weathered granite entered the sea to form the shallow strait.

What is “Kanmon” of Shimonoseki City?

Shimonoseki is the final point of Sanyodo Road connecting Kyoto and western Japan.

And there was “Sekisho” at the current location of Kameyama Hachimangu Shrine.  “Sekisho” is a checkpoint facility set up at major points of traffic by then government.

Shimonoseki was developed significantly as a port. And it was necessary to grasp not only marine traffic but also the traffic of land and people. This is the reason why the “Sekisho” was set up in Shimonoseki.

In the picture of the Kanmon Strait drawn in France in 1866, the strait was described as the “Shimonoseki Strait.”  This explains that Shimonoseki was the center of the strait until the end of the Tokugawa period.

So why did the name of the strait change from the Shimonoseki Strait to the current Kanmon Strait?

The answer lies in Moji town.

Why did the name change from the Shimonoseki Strait to the current Kanmon Strait?

We can see why the name of the strait has changed by looking at the building of the old Mitsui O.S.K. Lines in Moji built in Taisho 6 (1917).

The tiles of buildings are made using a technique called “Fukurinmeji.”

“Fukurinmeji” is a method to make bricks look aesthetic by raising joints between tiles in a semicircular shape.

“Fukurinmeji” was the finest finish for a tile prepared during that time.

Therefore, the fact that the “Fukurinmeji” was used in Moji, is one of the traces to show how prosperous Moji was during the time.

Moji was developed as a modern city.

Looking at the map in the middle of the Meiji era, you can see that Moji was developed as a modern city.

Moji flourished because of “Chikuho Coalfield.”

The main reason Moji flourished as a modern city was the “Chikuho Coalfield”, which was located very close to Moji.

This large coal field spread over Kitakyushu produced about half of the country’s coal.

The produced charcoal was transported to Mojiko (Moji Port). Moji Port was designated as a special export port in 1902 as a port for loading coal mines. And Moji town developed as a large city that transports coal both domestically and overseas. 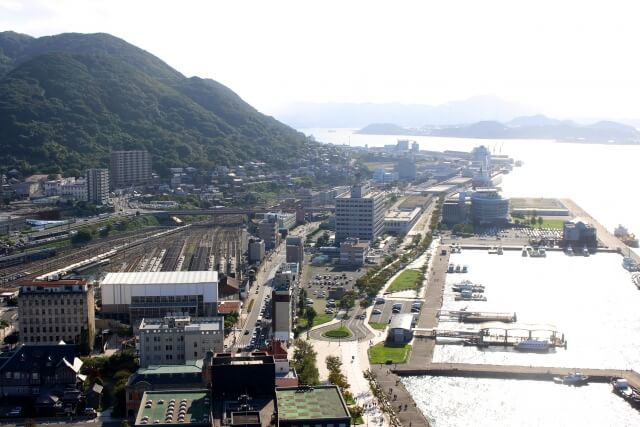 Taisho 14 map shows that the name of the strait has been changed from the Shimonoseki Strait to the Kanmon Strait.

Following Shimonoseki, which expanded greatly at the end of the Tokugawa period, Moji began to develop significantly in the Meiji era.

Due to the great development of both cities across the strait, the name of the strait has been changed.

With the prosperity of Shimonoseki and Moji, the construction of a transportation network connecting these two places was carried out at a rapid pace.

The current station building was built in Taisho 3 (1914) and is designated as a national important cultural property.

The railway network was developed starting from Mojiko Station.  And Mojiko Station became the gateway to Kyushu as the closest station to Honshu, the mainland of Japan. 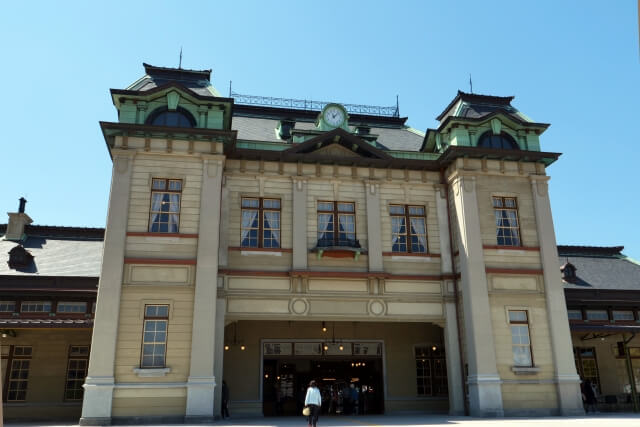 In 1873, the “Kanmon Ferry” connecting Moji and Shimonoseki was launched, and traffic between Honshu and Kyushu became active.

At that time, Mojiko (Moji Port) and Mojiko Station (Moji Port Station) were designed to be connected by an underpass.  The purpose is to make it easy to get from the port to the railway.

In addition to people and supplies, there were ships that even carried trains.

With such growth, sea transportation came to its limit.  And the construction of the world’s first undersea tunnel began in 1936.

What were the difficult points to build the first “undersea tunnel” in the world?

The hardship to build the undersea tunnel.

To build the undersea tunnel, totally four tunnels were excavated at the same time.

It was a safety measure so that there is an accident in one tunnel, another tunnel was still able to be used.

From the Moji station side, the shape of the entrance of the submarine tunnel is a square.  However, it becomes a vertical ellipse from about 450m (12m underground).

This is because the first part of the tunnel was made by embedding a square tunnel assembled outside in advance.

Further, around 900m from the Moji side entrance (20m underground), it will come to close to the bottom of the strait.  And the tunnel becomes round instead of an ellipse shape.

A shielding method was adopted for the construction.

The reason for adopting the round shape is that the tunnel was dug using a shielding method from this section.

The shield method is a tunnel construction method that is to excavate using a cylindrical machine. The outer frame of the cylindrical machine acts as a shield. And the tunnel was dug safely while preventing the collapse of the dug part.

The second difficulty of the Kanmon Tunnel was that workers were affected by air pressure. Workers had to enter a decompression chamber to reduce air pressure.

Lastly, the third difficulty of the Kanmon Tunnel was springwater. Springwater came out from the weak ground, making the work difficult.

Finally, The Kanmon Tunnel was completed.

The Kanmon Tunnel was completed in 1944, eight years from the start of the construction.

スポンサーリンク
Kurobe Dam: Why was it built in such an unexplored region?
Tottori Sand Dunes: Why is the Dunes by far very popular?