Why was the Kurobe Dam built in such an unexplored region on purpose?

Kurobe Dam is located in the southeastern part of Toyama Prefecture, in the area surrounded by the Northern Alps.

The construction of the Kurobe Dam was a major project of the century.

The Kurobe Dam (or Kuroyon Dam) is a variable-radius arch dam located in the Kurobe River.

It supports the Kurobe No. 4 Hydropower Plant and is owned by Kansai Electric Power Company.

In Japan, during the post-war recovery, the industry rapidly developed and the power shortage occurred as a result.

Electric power was limited to five days a week in factories and 3 days a week in households, particularly in the Kansai area (the western part of Japan), which became a major social problem.

To solve the problem, a huge hydropower dam was constructed. 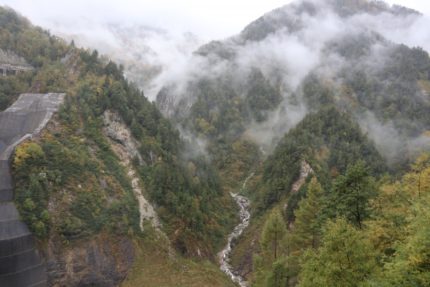 Until recently, tourer used a tunnel trolley bus to get to Kurobe Dam from Ogizawa Station in Nagano Prefecture.

The trolley bus was in service only in Kurobe in Japan, but it was abolished in 2018. It has been replaced by an electric vehicle to visit Kurobe Dam.

The construction of the tunnel was a heavy task.

Originally, the 4.5km-long tunnel from Ogizawa Station to Kurobe Dam was created to carry materials necessary to construct the dam. 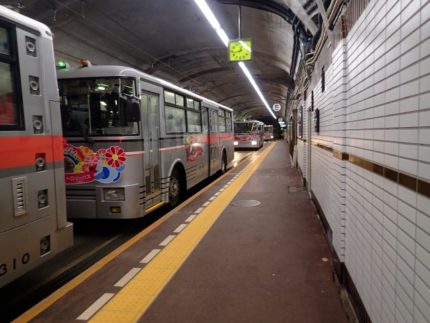 The construction of the tunnel was a heavy task. Inside the tunnel, there was a so-called “crush zone”, which required more time and labor because the area was covered with very cold groundwater as well as fragile earth and sand.

The tunnel was dug from both sides of the tunnel, Nagano side (Ogisawa route) and Toyama side (Tateyama route). It finally penetrated 1.7 years after the launch of the construction. You can find a “penetration point” signage in the tunnel.

Kurobe Dam is a huge dam for hydroelectric power generation

200 million tons of water is reserved in the dam, and all water is used for power generation.

The Kurobe Dam’s power plant is located 10 km downstream from the dam. With a distance of 10 km, the height difference between the dam and the power plant is 545 m.

The Kurobe Dam was built in the unexplored area partly to create this height difference.

The Kurobe Dam is also called as “Kuro-Yon(Kuro 4)” because it was the 4th power plant in Kurobe area.

Before the Kurobe Dam (the No. 4 Power Plant) was built, there were several power plants downstream of Kurobe, and their power generation was about 230,000 kilowatts.

Since the Kurobe Dam was built, the amount of electricity has increased to about 900,000 kilowatts. There are currently 10 power plants, including downstream ones, in Japan.

Why the dam was built in Kurobe?

The Kurobe Dam was created in a secluded area not only to make a large difference in height between the dam and the power plant but also to store a large amount of water and flow them into the downstream power plant.

Kurobe is the optimal location for a dam.

Geologically, both shores of the upper part of the Kurobe Dam are made of the same granite. Therefore, Kurobe Dam has a wide terrain where water can accumulate widely because water erodes the shore evenly.

On the other hand, the downstream side of the Kurobe Dam is a terrain where several types of rocks are mixed.

In the downstream, water flows toward an area where different types of rocks are adjacent, which made the shore cut down narrowly. With the large difference in height, it created a terrain by narrowing the river width.

Therefore, the upstream side of the Kurobe Dam is suitable for storing abundant water.  And the downstream side is suitable for generating the power of water. The water power flows vigorously in a place where the water is narrow and the height difference is large.

In other words, the Kurobe Dam is located at the two borders where the width of the river changes greatly. As such, geologically most appropriate location for the dam was selected and constructed.

When we take a cable car and a ropeway from the Kurobe Dam to the Daikanbo Observation Deck, we can see a terrain surrounding the Kurobe Dam. 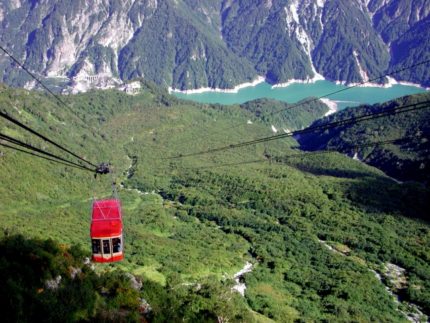 Kurobe is abundant with snow.

The ropeway to the observatory has no pole brace. This is because the avalanche could break pole braces. The altitude of the area is 2000m and the snow cover amounts to 7 m during wintertime.

Thanks to the heavy snow, even in summer when the water volume is low, winter snow melts slowly so that melted water flows into the dam.

Having abundant snow is also one of the reasons that the Kurobe Dam was constructed in the unexplored region.

The observatory is located at “Tateyama Mountain Range”.  If you look down at the Kurobe Dam from the observatory, you will find 3000 m-level mountains on the other side of the dam.

The opposite side is called “Ushiro-Tateyama Mountain Range” and the Kurobe Dam is located in a valley between these two 3000m-level mountain ranges. 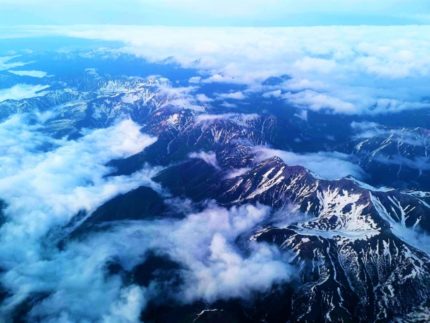 The ropeway to the observatory has no pole brace in between. This is because avalanche could break pole braces. The altitude of the area is 2000 m and the snow cover amounts to 7 m during the wintertime.

Thanks to the heavy snow, even in the summer when the water volume is low, winter snow melts slowly so that melted water flows into the dam.

Another reason that the Kurobe Dam was constructed in the unexplored region is that the area has a lot of snow.

The observatory is located at “Tateyama Mountain Range”. If you look down the Kurobe Dam from the observatory, you will find 3000 m-level mountains on the other side of the dam.

The opposite side is called “Ushiro-Tateyama Mountain Range” and the Kurobe Dam is located in a valley between the two 3000 m-level mountain ranges. 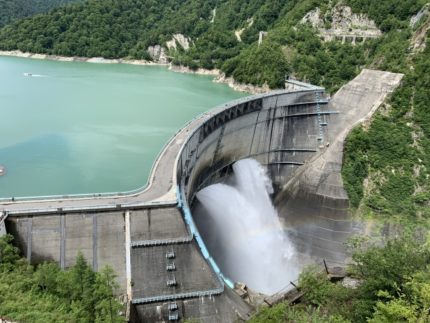 With the completion of the Kurobe Dam, the power situation has improved, and Japan has entered a period of high growth and development.