So before I forget the contents of the TV program, I would like to write the focal points as our memorandum in this blog.

What is the relationship between Nagoya and Tokugawa Ieyasu?

Tokugawa Ieyasu (1543-1616) was the founder and first shogun of the Tokugawa Shogunate of Japan.

Tokugawa Shogunate e effectively ruled Japan from the Battle of Sekigahara in 1600 until the Meiji Restoration in 1868. 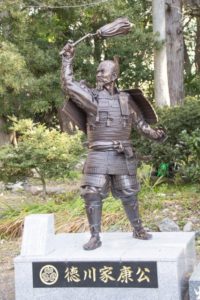 Tokugawa Ieyasu was one of the three unifiers of Japan, along with his former lord Oda Nobunaga and Toyotomi Hideyoshi.

Oda Nobunaga and Toyotomi Hideyoshi are from Owari. In the days of Nobunaga and Hideyoshi, the center of Nagoya was located in Kiyosu.

Tokugawa Ieyasu built the Nagoya castle as a battle base.

In 1610, Tokugawa Ieyasu from Mikawa built the Nagoya castle at the current location instead of Kiyosu.

Tokugawa Ieyasu built the Nagoya Castle during the time of the Sekigahara Battle in 1600 and the Siege of Osaka in 1614. He needed to build the castle as a base to deploy strong battles. 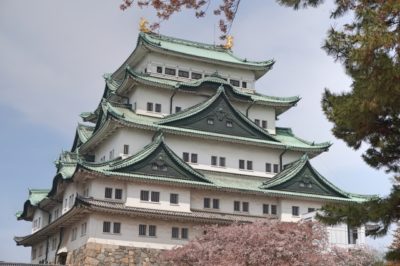 “Umadashi” is one of the strengths of the Nagoya Castle. Umadashi is a moat built in front of the gate to create a space that works effectively in both offense and defense.

The secret of the other strength of the Nagoya Castle is Ishigaki, a stone wall.

The stone used for a moat is different depending on the location. In some places, granite was used and in other locations sandstone was used. This is because “Daimyo” (feudal lord) responsible for each moat was different.

Having many Daimyo take charge of building a castle in this way is called the “Tenka Bushin” system. Tenka means the realm.

The Nagoya Castle was built by the “Tenka Bushin” system, and the building cost was borne by the Daimyo in charge of the construction.

Also, since the Nagoya Castle is located on the northern edge of Atsuta Plateau, it is considered to be an excellent defense castle. On the northern side of the castle, a large “Umadashi” (moat) was created by an embankment.

The construction of the Nagoya Castle and the castle town were well planned ahead.

This means that when Ieyasu built the Nagoya Castle, he was thinking of using Umadashi as a future utility space (space for food storage and shelter, etc.) in anticipation of the peaceful era after the battle era is over.

Nagoya Castle is the largest in Japan in terms of total floor area. It is the third tallest after the Edo Castle and the Osaka Castle.

At that time, this square board area in front of the castle was inhabited by the townspeople, while “samurai” (samurai warrior) lived outside. Ieyasu made preferential treatment for the townspeople.

Ieyasu aimed for building an economic city centered on merchants, not samurai warriors.

“Hisaya Odori Street”, now famous for its TV tower, is built by utilizing the easternmost section of the square.

Nagoya’s economic development began with the town creation by Ieyasu.

Nagoya was built 400 years ago by Tokugawa Ieyasu.

Handwritten letters from Nobunaga, Hideyoshi, and Ieyasu with powers at that time are still preserved in Atsuta Jingu Shrine.  It is the indication that the shrine was very cherished by these leaders.

Going further south on the southern end of the plateau, there is a signpost that crosses the old Tokaido Street. Since the road from Tokaido Street is a dead-end here, the road turns south and heads for Shichiri-no-Watashi.

In the time of Ieyasu, only between Atsuta and Kuwana of Tokaido Street was traveled by boat. This is called Shichiri-no Watashi. Watashi means crossing in Japanese.

Atsuta prospered as a port because those who traveled from Tokaido Street boarded a boat from this Shichiri-no-Watashi section.

This area is called the Nobi Plain and has three large rivers. The Kiso River, the Nagara River, and the Ibi River.

In those days, when traveling by land from Atsuta to Kuwana, travelers had to cross each of these three rivers, so they traveled by sea. 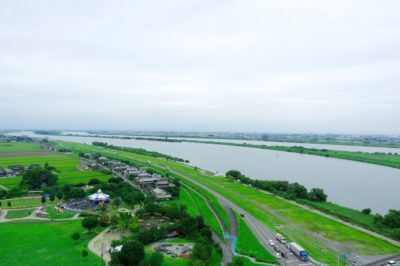 Ieyasu aimed at creating a castle and a castle town in Atsuta plateau by taking notice that Atsuta is located at the southern tip of the plateau since Atsuta had been flourished for a long time from the ancient time. Since he made Atsuta the center of Nagoya’s trade Nagoya has been flourished.

Atsuta plateau was spread 7 km north and south, the distance from the castle town to the port was considered as an issue.

However, at the same time, Ieyasu built the Nagoya Castle and created a canal linking the castle and Atsuta, using the slopes of the plateau to maintain water depth. This canal connected the castle town with the port of Atsuta and thus trade was expanded.

This canal is the current Horikawa Canal. Horikawa is considered to be the part of the Nagoya Harbor and not a river. The water of Horikawa also contains some salt. 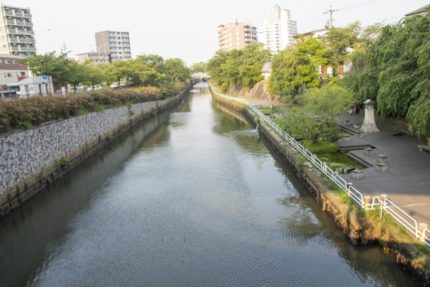 By flowing wood from the Kiso Mountains to the Kiso River and transporting them from Atsuta to the castle town of Nagoya using the Horikawa Canal, Nagoya prospered as a timber distribution base for nationwide.

スポンサーリンク
Kobe Port: Why Kobe has so flourished and what does “High Color“ mean?
Kurobe Dam: Why was it built in such an unexplored region?